Arsenic Levels in our water. Is it OK, or is it not? The question hovers. 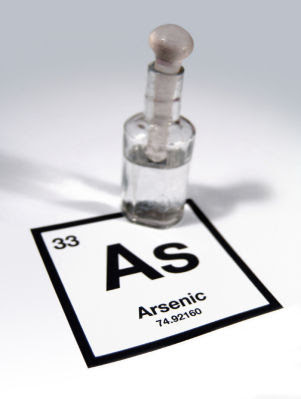 According to the U.S. Environmental Protection Agency (EPA), drinking water with low levels of arsenic – 10 parts per billion – has been deemed nontoxic and okay for human consumption.

However, new research has revealed that the water may not be so ‘safe’ to drink after all.

Researchers from both the Marine Biological Laboratory in Woods Hole, Mass.,  and Geisel School of Medicine at Dartmouth have discovered that drinking water with low levels (10 ppb) of arsenic stimulates adverse health effects in pregnant and lactating mice, as well as their offspring.

The experiment had stemmed from previous studies the researchers had done, which had shown exposure to low levels of arsenic in water caused mice to have lower immune responses and become more susceptible to the flu.  They had found the effects were even greater on the mice who were exposed to the arsenic in utero and in early childhood.

“Our original intent was to repeat the flu study – we were going to give the arsenic water to pregnant moms so the babies would be exposed in utero and nursing,” said Dr. Joshua Hamilton, chief academic and scientific officer for the Marine Biological Laboratory and one of the study’s lead authors..  “Then we would take away the arsenic, and at some point in the future give them the flu to see how they’d react.  We never got to do that experiment because what we saw was the consequence of what they published.  Giving mice 10 ppb arsenic in water led to the babies being substantially smaller.”

After giving the mice the water, the pregnant and/or lactating mothers experienced problems with their lipid metabolism, which caused lower levels of nutrients in their blood and breast milk.  These nutrient deficiencies lead to growth and developmental deficiencies in their offspring while they were still breastfeeding.

“In the mom’s blood and breast milk, there were significant decreases in triglycerides – an important nutrient for mom and baby,” Hamilton said. “It was the principal reason the babies were under-developed.  When we took new born pups with arsenic moms and switched them over to feed from non-arsenic moms, they started to recover.  So it suggested it was a nutrient problem, not a direct effect of the arsenic on them but on the mother.”

After an order issued by the EPA in 2006, the arsenic standard for drinking water was set at a limit of 10 parts per billion in order to protect consumers from the adverse effects associated with chronic arsenic exposure.  According to the EPA’s website, such complications include nausea, vomiting, diarrhea, partial paralysis, blindness, and an increased risk of various types of cancer.

While 10 ppb is the EPA standard, it only applies to public, regulated well waters.  The problem lies in the unregulated well waters in arsenic heavy regions – such as New England, Florida, and the Upper Midwest – which have been found to have concentrations of 100 ppb and higher. 🙁

The researchers noted that since the experiment was done in mice, it does not necessarily translate to humans since they are not physiologically identical.  However, Hamilton said that the experiment should still serve as a cautionary tale because tests on mice can be predictive of how something will react in humans.

“I think as a community in toxicology, we’re seeing more and more studies that are suggesting that 10 ppb may not be protective enough for humans,” Hamilton said.  “I can’t think of any other drinking water contaminant regulated by the EPA where the federal drinking water standard is so close to levels where we see adverse effects in animals and humans.  It’s a very unique chemical.”

The team hopes to do further experiments to understand what exactly is happening to the physiology of the mice, as well as to see if it’s necessary for the EPA to lower the arsenic standard.  But according to Hamilton, there are more hurdles to overcome than just proving the science.

“But at the end of the day, we gave [mice] drinking water with arsenic in it with exactly the same dose that you can drink out of your tap that the EPA says is safe – and bad things happened to them,” Hamilton added.  “It needs further investigation, but certainly it’s a cautionary tale that at such a low dose, we’re seeing these dramatic effects on these animals.”

PrevPreviousWhat’s In Your Water?
NextFluoridation and Arsenic. Strange Friends.Next
On Key

Magnesium: Are you getting enough?

Magnesium is the central element in chlorophyll and the basis of early life on the planet. (Which is a good thing when you consider all of the amazing things it does for us every day):

Alkaline Diet 101: Is an orange alkaline?

I’m going through some serious re-evaluation. You see, I’m getting queries from people about what is in the alkaline diet, and what’s not – as usual. After all, I wrote a book on it. But I’m beginning to see that there is so much more to the alkaline diet.

The Simple, Untold Truth about the Alkaline Diet.

The hidden secret of the Alkaline Diet that no-one talks about.. and why.

Millions of Americans Are In Water Debt

More than 1.5 million households in a dozen major U.S. cities with publicly operated water utilities owe $1.1 billion in past-due water bills, according to